What if Darwin had a smartphone? 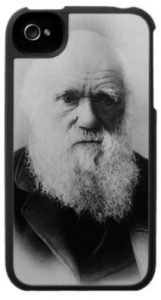 Back in the day, science was often relegated to wealthy, self-funded explorers and “gentlemen scientists” the likes of Benjamin Franklin, Charles Darwin, and Isaac Newton.  One could argue that they were the original “citizen scientists” but back then you had to have money and time to explore the world and formulate big thoughts. For the average citizen, science was an expensive endeavor accessible to the privileged – and certainly not something in which you were encouraged to participate.

Flash forward 200 years… and imagine that Carlos Darwin, an inquisitive and smart kid from a not-so-wealthy family is able to use a smartphone to document the finches on each of the Galapagos Islands where he lives?  And his cousin Josefina Darwin, is able to send him pictures of finches she is seeing in her backyard in New Jersey?  And they are able to share their photos and contribute their observations of the natural world with people around the globe – including researchers who were looking for changes in species distribution due to climate change.  Now we’re talkin’ citizen science!

What if all those budding “Darwins” in OUR classes and communities used their cell phones for more than Facebook and Snapchat?  What if they spent time outdoors, exploring their backyards, parks, woodlands, and swamps using their mobile phones to document all the biodiversity they can find?  What if there was an app for THAT?

Welcome to the world of iNaturalist!

Backed by the California Academy of Sciences and National Geographic, iNaturalist is mobilizing a new generation of nature explorers and average citizens around the world to capture information on biodiversity.  Now instead of roaming the neighborhood with a butterfly net, collecting jars, and a bulky field guide you can simply take your smart phone and snap pictures using the iNaturalist app.  With a few key strokes you can add gps coordinates and field notes and send them whizzing through cyberspace to the iNaturalist portal where people from around the world can check out what’s going on in your backyard.  Unsure of what the organism is?  iNaturalist expert volunteers are on call to help with species identification and natural history notes.

Here at The Morpho Institute, we are thrilled to be using iNaturalist to create a virtual field guide to our study sites in the Amazon and are working with educators across the country to bring our Amazon images into their classrooms!

Don’t you think Charles Darwin would approve?  It’s no secret that Mr. Darwin loved poking around the natural world more than the dry academics of the university.

“…no pursuit at Cambridge was followed with nearly so much eagerness or gave me so much pleasure as collecting beetles… I will give a proof of my zeal: one day, on tearing off some old bark, I saw two rare beetles, and seized one in each hand; then I saw a third and new kind, which I could not bear to lose, so that I popped the one which I held in my right hand into my mouth. Alas!  It ejected some intensely acrid fluid, which burnt my tongue so that I was forced to spit the beetle out, which was lost, as was the third one.”   — Charles Darwin

Betcha Mr. Darwin would have appreciated a smartphone with the iNaturalist app at this moment!